Topics covered in this section are:

$-a$ means the opposite of the number a.

In the next example, we’ll order expressions with absolute values.

In the next example, we simplify the expressions inside absolute value bars first just as we do with parentheses.

So far, we have only used the counting numbers and the whole numbers.

Most students are comfortable with the addition and subtraction facts for positive numbers. But doing addition or subtraction with both positive and negative numbers may be more challenging.

We will use two color counters to model addition and subtraction of negatives so that you can visualize the procedures instead of memorizing the rules.

We let one color (blue) represent positive. The other color (red) will represent the negatives.

We will use the counters to show how to add:

When the signs are the same, the counters are all the same color, and so we add them. In each case we get $8$—either $8$ positives or $8$ negatives.

We will continue to use counters to model the subtraction. Perhaps when you were younger, you read “$5-3$” as “$5$ take away $3$.” When you use counters, you can think of subtraction the same way!

We will use the counters to show to subtract:

Each example used counters of only one color, and the “take away” model of subtraction was easy to apply.

What happens when we have to subtract one positive and one negative number? We’ll need to use both blue and red counters as well as some neutral pairs. If we don’t have the number of counters needed to take away, we add neutral pairs. Adding a neutral pair does not change the value. It is like changing quarters to nickels—the value is the same, but it looks different.

Subtracting a number is the same as adding its opposite.

What happens when there are more than three integers? We just use the order of operations as usual.

Since multiplication is mathematical shorthand for repeated addition, our model can easily be applied to show multiplication of integers. Let’s look at this concrete model to see what patterns we notice. We will use the same examples that we used for addition and subtraction. Here, we are using the model just to help us discover the pattern. 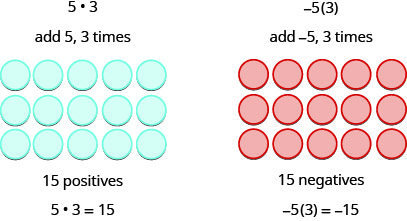 The next two examples are more interesting. What does it mean to multiply $5$ by $-3$? It means subtract $5$, $3$ times. Looking at subtraction as “taking away”, it means to take away $5$, $3$ times. But there is nothing to take away, so we start by adding neutral pairs on the workspace. 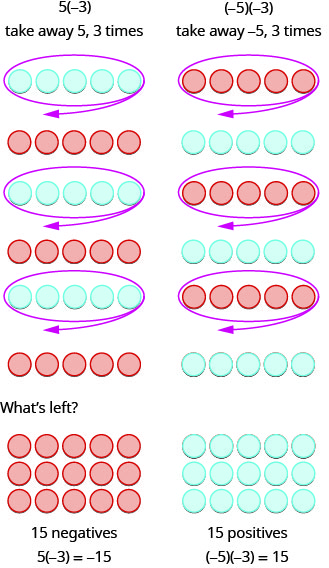 Notice that for multiplication of two signed numbers, when the

signs are the same, the product is positive.

signs are different, the product is negative.

What about division? Division is the inverse operation of multiplication. So, $15 \div 3=5$ because $5 \cdot 3=15$. In words, this expression says that $15$ can be divided into $3$ groups of $5$ each because adding five three times gives $15$. If you look at some examples of multiplying integers, you might figure out the rules for dividing integers.

Division follows the same rules as multiplication with regard to signs.

MULTIPLICATION AND DIVISION OF SIGNED NUMBERS

For multiplication and division of two signed numbers:

If the signs are the same, the result is positive.

If the signs are different, the result is negative.

Multiplying a number by $-1$ gives its opposite.

What happens when there are more than two numbers in an expression? The order of operations still applies when negatives are included. Remember Please Excuse My Dear Aunt Sally?

Let’s try some examples. We’ll simplify expressions that use all four operations with integers—addition, subtraction, multiplication, and division. Remember to follow the order of operations.

The last example showed us the difference between $(-2)^{4}$ and $-2^{4}$. This distinction is important to prevent future errors. The next example reminds us to multiply and divide in order left to right.

Remember that to evaluate an expression means to substitute a number for the variable in the expression. Now we can use negative numbers as well as positive numbers.

1.2.6 Translate Phrases to Expressions with Integers

Our earlier work translating English to algebra also applies to phrases that include both positive and negative numbers.

1.2.7 Use Integers in Applications

We’ll outline a plan to solve applications. It’s hard to find something if we don’t know what we’re looking for or what to call it! So when we solve an application, we first need to determine what the problem is asking us to find. Then we’ll write a phrase that gives the information to find it. We’ll translate the phrase into an expression and then simplify the expression to get the answer. Finally, we summarize the answer in a sentence to make sure it makes sense.

HOW TO: Use Integers in Applications